Back to Amsterdam family-style this time - our third trip in the last year and a half - and it just gets better and better.

This time we visited with family and kids (aged 8 and almost 2), and parents-in-law who arranged a house-swap in one of the best locations in Amsterdam, Keizersgracht.  Although four hours, the TGV from Paris to Brussels is quick, but then slows down between Brussels – Antwerp – The Hague – Amsterdam Central Station. Fortunately, transportation from the train is easy, even though it may look insanely busy, since many trams depart from Central Station. The 14 brought us within a block of our apartment which faced the Prinsengracht canal – beautiful view, incredible location in the center of town or Centrum – Grachtengordel (The Canal Belt). 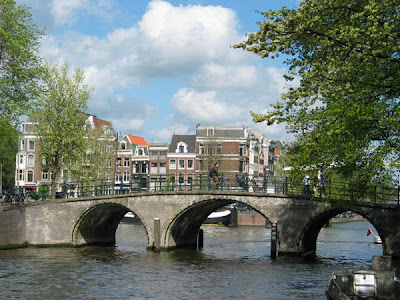 To make the most of my Iamsterdam 24-hour pass - an all-you-can-eat cultural pass to museums, tours, and discounts on bike rentals and restaurants - we started on Friday night, when many museums are open late. First stop and top of everyone’s list was the Rijksmuseum (open until 10pm on Fridays in the Museum Quarter : Staadhouderskade 42) with a vast selection of Dutch works, including an incredible dollhouse commissioned by a wealthy lady of Amsterdam, Petronella Oortman, in the 17th century. A very unique collection, although much of the museum is closed for renovation until at least 2010.


In the same evening, we were able to visit the Van Gogh Museum (also open until 10pm on Fridays) and were astonished by the collection. The layout on the first floor of the museum, where the Van Gogh exhibit is displayed, is well-thought out and tells a complete and fascinating story of the artist and his work. Even Thomas (he is only 8 years old) commented on how you could see Van Gogh’s sadness (and likely madness) developing in his paintings.


Taking a leisurely stroll back to our apartment through the windy streets and canals as the summer dusk lingered until after 10PM, was another highlight as the streetlights on the water against the traditional Dutch facades were stunning. 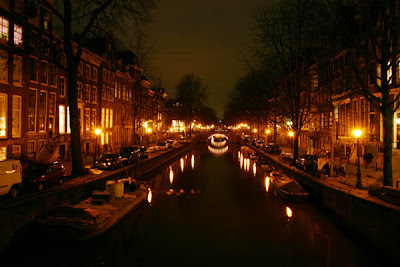 Having an apartment means enjoying breakfast at home with traditional toast and Old Amsterdam cheese, one of many versions of gouda widely available in Amsterdam. Afterwards, we set out to explore our neighborhood which is home to the Anne Frank House, Tulip Museum, independent shops, cafes and trendy restaurants. Our favorite was a toy store on Prinsengracht with creative, humorous gifts for kids and adults, like gum that tastes like chicken, a mustache for every day of the week kit and Thomas’s favorite, the Potato Gun.


Then we stopped for a peak at the Houseboat Museum, an inexpensive and interesting way to see how people live in the boats lining the canal. And the brochure is true…it is much more roomy than you would imagine with all the modern conveniences you would find in any home. After a quick stop for a great club sandwich at a local spot, we headed to the Heineken Experience...fun for the whole family.


Dinner at a popular Indonesian restaurant, Kanjil and de Tiger (webiste in Dutch, but contact info available in English and many at the restaurant speak English), thanks to a recommendation from a Dutch friend. Personally, I describe Indonesian food as a cross between Chinese and Thai, but that doesn’t do it justice. Chicken and pork skewers with peanut sauce, hard-boiled eggs dressed in spicy mayo and steamed vegetables in light coconut sauce are a few examples. Casual, kid-friendly and with something for everyone on the family-style menu.


A quick stop at the Tulip Museum (and by quick I mean less than 5 minutes), was all that was needed to answer all my questions about tulips.


Where do tulips originate?
Not from Europe as you may guess, but from Central Asia or the Ottoman Empire.


How do they plant so many tulips in the tulip fields?
They are planted in weaved beds that can be pulled up by tractors in sheets making it incredibly easy to reuse the bulbs the following year.


When do you plant tulip bulbs?
September or October. They bloom in May and bulbs are available shortly afterwards.


The Pancake House (Prinsengracht 191, 0031 20 625 13 33) is the best thing about Amsterdam mornings. Gigantic savory and and sweet pancakes served with three types of syrup, molasses and powdered sugar. I recommend bringing a friend, and splitting one bacon, onion and cheese pancake and then a cherry pancake with ice cream and whipped cream. Great way to start the day.


Strolling through the neighborhood, we stumbled upon a 17th century brown cafe named Cafe’t Papeneiland (2, Prinsengracht) with outdoor seating overlooking a canal. Great beer, an apple strudel type dessert and a trapdoor that helped Catholic priests escaping from persecution wasn’t so typical, but that’s Amsterdam.


Hotel Pulitzer, Prinsengracht 315-331,020 5235235,  www.starwoodhotels.com - Part of Starwood's Luxury Collection and overlooking two canals, this unique property consists of 25 restored canal houses dating back to the 17th and 18th centuries.  Rooms vary considerably, from small, cozy rooms to two-story standalone homes.  Great location and a helpful staff.  The hotel owns its own canal boat that takes visitors on tours or can be rented for special occasions.

New! CitizenM, Princes Irenestraat 30, 1077WX Amsterdam, The Netherlands, +31 (0)20 8117 090, reservatios@citizenm.com, www.citizenmamsterdamcity.com - Named trendiest hotel in the world by TripAdvisor, CitizenM offers two locations in Amsterdam, city center and near the airport, for a unique an affordable hotel option.  See photos and find out more about the hotel in our post - 2010 Trendiest Hotel in the World - CitizenM, Amsterdam.


Resources
Amsterdam Tourist Information
Travel guide to Amsterdam features information on hotels, apartments, sights and entertainment in Amsterdam and all the Netherlands.

Email ThisBlogThis!Share to TwitterShare to FacebookShare to Pinterest
Labels: Netherlands