How to make Padrón Peppers


(Pimento de Padrón, named after the region in Spain where they are grown) 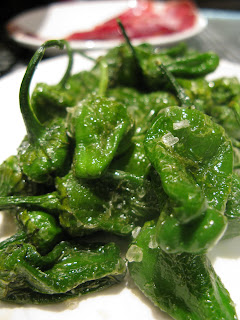 Plate full of peppers
Spanish Olive Oil
Sea salt in flakes
Heat the olive oil (about a 1/2 cup per pound) until hot and toss in the peppers until the skins just start to separate from the pepper, but do not turn brown, about 2 minutes. Quickly drain them and pat them dry with paper towels, then sprinkle sea salt over them and serve.

Warning: There is a peculiarity of these peppers, called the Russian Roulette Effect. Every once in a while (some say one in 50, others one in 100+, I seem to get three in every plate!), you get a spicy one, and they can be very hot. Keep a cold glass of Sangria nearby.
Posted by Stephanie at 6:13 AM

Email ThisBlogThis!Share to TwitterShare to FacebookShare to Pinterest
Labels: Spain