The last frontier - two weeks on a Russian icebreaker, through the windy Drake Passage to the pristine and unmatched landscape of Antarctica. 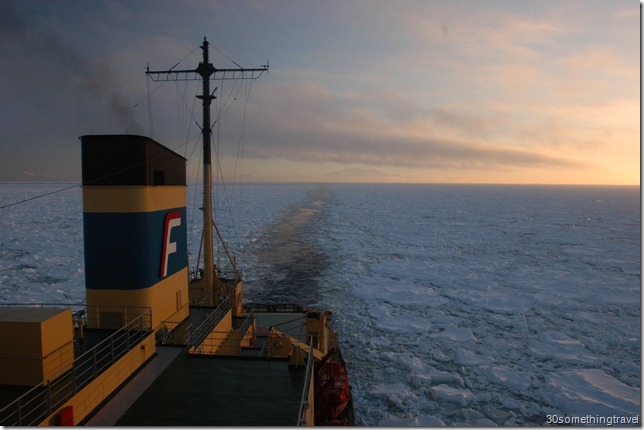 When I tell people about my trip to Antarctica and I get past the penguins (which never happens when anyone under 10 is in the room) and the helicopter that was assembled on the ship (which usually turns into a conversation with any guys in the room), I always hesitate whether to talk about the Drake Passage, so let’s just get that out of the way up front – it’s windy.  It’s very windy, and when you choose to go to Antarctica on an icebreaker (and I wouldn’t do it any other way), then you should understand that there is no hull.  It is smooth and round on the bottom of the ship…which is why it can slide up on thick ice and break through…which allows you to get deeper into Antarctica than traditional ships.  But it is also why the ship rocks, a lot, when you are going through the Drake Passage where the water circles around Antarctica, which is why almost everyone on the ship is on motion-sickness pills for the 36 hours you go through it, each way, and why you sometimes need to wear a seatbelt, or two, when you sleep.  But it really isn’t that bad.  The boat rocks, but other than some difficulty keeping your teacup on the table, it is smooth sailing for the rest of the trip. And with that said…let’s get back to the “pristine and unmatched scenery” part…

Antarctica offers pristine and unmatched scenery everywhere you look.  First the ice that surrounds you ranges from crystal clear to snow white to icy blue.  And ice here is categorized, much like clouds, because there are so many different types.  There is pancake ice which is just what it sounds like – an endless array of thin, white disks of ice across the top of the water.  There are plateaus of ice.  There are sheets of ice that fall into the ocean just as you are taking a photo.  And there are glaciers that continue on their way leaving their mark as they go. 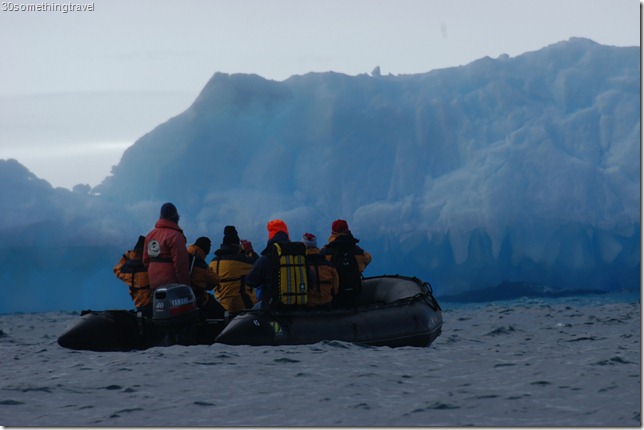 The two weeks we spent on the Kapitan Khlebnikov, a Russian ice breaker, were comfortable, educational, entertaining and the most adventurous travel we have ever done.  Each day we were briefed on the days activities, usually two, sometimes three off-ship excursions by Zodiac, helicopter or foot.  Small groups, less than 10, take Zodiacs to shore or on sightseeing tours that allowed us to view everything from wildlife to ice caves up close.  Two helicopters were carried on board but disassembled during transit and put together each time we needed them.  There is nothing like flying off the deck of a ship, over pristine white, untouched snow in search for a colony of Emperor Penguins and finding them!  But, the “on foot” excursions might have been the best of all.  An icebreaker has jets that move in different directions helping to get the ship out of thick ice when needed.  It can launch the ship on and off of thick plates of ice, so after finding the colony of penguins, the ship “docked” on the ice, we suited up and went out to explore the Antarctic. 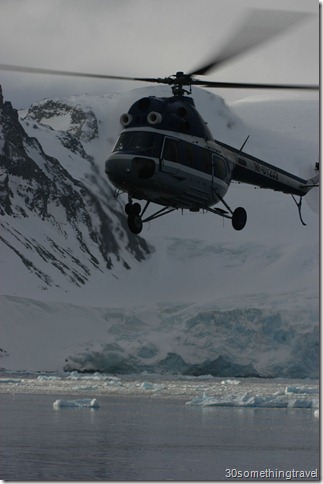 The highlight of course is the wildlife: 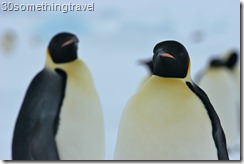 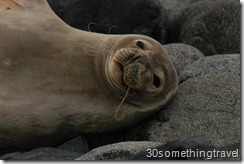 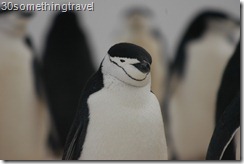 Chinstrap penguins, my personal favorite because they always look like they are smiling 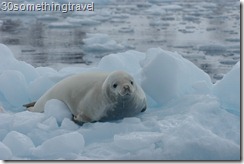 And the many varieties of hardy birds that somehow survive in the Antarctic.

But there is something else about being at the end of the world, in a place few people have ventured and many have not survived.  Honestly, I didn’t want to go when my husband put this on the itinerary of our around-the-world trip.  I was nervous about being so far away, so disconnected, so isolated, and so cold.  Instead of being lonely, it is peaceful and calm. It is simply the most beautiful, undisturbed place on Earth.  And after visiting 33 countries that year, Antarctica topped the list.  I loved it, and can’t wait to go back someday.