While the US is popping champagne, watching the ball drop in Times Square and kissing at midnight, people around the world are preparing for NYE celebrations in their own way...and not necessarily on December 31st.

At 30-something Travel, we look for any excuse to take a vacation, so we have a goal to spend New Year's Eve in as many different places as possible.  So far, that includes North America (New York, Miami, San Franciso, Whistler B.C.), South America (Venezuela), Europe (London, Paris) and we can soon add Australia to the list as we head to Sydney this year to welcome 2010.  Here are a few of the places we loved or have put on the list for future new year celebrations... 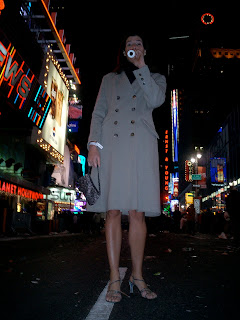 New York, New York
Hundreds of thousands of attendees can't be wrong, but there is more than one way to join in the fun. The streets are cleared in the afternoon as people begin to flood Times Square to see the famous ball drop. But once in, it is near impossible to sneak-out for food, drinks or bathroom breaks during the many hours of waiting. So, we did it the 30-something way...a room at the W Times Square, dinner at their own Blue Fin restaurant (a multi-course set menu with champagne) all perfectly timed for the doors to open onto Times Square 15-minutes before midnight. Prime viewing, a fun and exciting setting and only a few steps back to the comfort of your room. This is exactly what we save all those Starwood Points for! We didn't even have to book years in advance, so before braving the elements, check hotels in the area for options.

Mochima, Venezuela
In 2001 we went to Venezuela for a break from the traditional white Christmas and celebrated New Year's Eve in a remote beach town.  We were welcomed by the family that ran the small hotel where we were staying in Mochima, to a New Year's meal.  Various courses were made in huge quantities and then, at the stroke of midnight, grapes were served for good luck and as it is customary, we all ate twelve, one for each month of the new year. Afterwards, the whole town was in the streets wishing each other Feliz Año Nuevo. 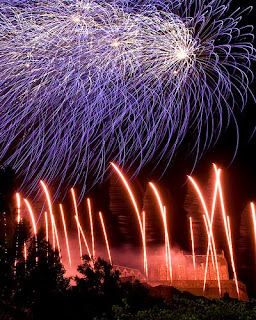 One of the biggest New Year’s Eve parties in the world is in Edinburgh, Scotland. Hogmanay festivities include a torchlight procession and fire festival, with thousands of participants carrying torches through the city streets. The burning of a Viking ship kicks off the festivities, then its days of concerts, live entertainment and finally the fireworks creating a spectacular finale to this five-day event. If you go, you need to know that the song “Old Lang Syne” was written by a Scot, Robert Burns.  It is sung on the stroke of midnight when fireworks are launched from Edinburgh's seven hilltops, lighting up the skies above the massive Edinburgh castle. Official website - http://www.edinburghshogmanay.com/ Post your resolutions on the Hogmanay resolutions wall. (Photo credit: http://www.flickr.com/photos/theedinburghblog/ / CC BY 2.0 from http://www.theedinburghblog.co.uk/.)

Hong Kong, China
Chinese New Year is one of the biggest events in the world and Hong Kong is the place we want to be to celebrate. On February 14, 2010, China will mark the beginning of the year of the tiger - it's all based on the lunar calendar, the first new moon in the first month of 2010. Firecrackers, parades and incense are all part of the fun. Before the new year, many people literally "wipe away" the previous year by cleaning their homes and offices. On Lunar New Year's Eve, family members share in an extravagant meal full of dishes that bring good luck - shoe-shaped dumplings, cookies, oranges, and orange-inspired dishes because oranges symbolize good fortune. And the day concludes with fireworks. New Year’s Day is the day for the brightly-colored dragon and lion dance which is believed to ward off evil. If you are closer to London than Hong Kong, plan to visit the huge Chinese New Year celebration in their own Chinatown.


The French consider New Year's Eve a quiet family affair with many people hosting dinner parties or splurging on multi-course meals at restaurants. The one thing they all have in common is the drinking of great French champagne.

A couple of years ago we wandered out after a dinner with friends and found a young crowd at the Trocadero or Eiffel Tower with champagne bottles in hand.  The grand finale was the Eiffel Tower sparkling for 10-minutes (as it does every hour in the evenings) marking the beginning of the new year.

Japan
The Japanese observe Oshogatsu as part of a week-long celebration. Businesses close to allow families to spend time together and on December 31st at midnight, temple bells are rung 108 times to welcome the new year. On New Year's Day, the post office delivers all New Year’s cards, or Nen-ga-jyo, which bear good wishes for the new year to neighbors and friends. Food is a highlight in Japanese New Year’s celebrations, but it doesn’t happen until houses are cleaned. Similar to Spring Cleaning, Osoji is the act of thoroughly cleaning Japanese households. Then it is time to prepare traditional New Year's meals such as Toshi-koshi soba, which literally translates to "Across the Years Noodles".

Sydney, Australia
This year, we'll ring in the new year in one of the first time zones to enter 2010.  We'll be at Sydney Harbor, with over one million other people, waiting for the fireworks - a 9PM show for the kids and the big midnight show at the Sydney Harbor Bridge - that many consider the best fireworks display in the world. To find the perfect spot, check out this great "vantage points" interactive map to find out where the fireworks will be launched, public transportation options and even where bathrooms can be found: http://www.cityofsydney.nsw.gov.au/nye/VantagePoints/default.aspx.  But be warned, this year the city is hoping for a sober celebration, and alcohol will be banned in many prime viewing locations.  Details in the recent issue of The Australian newspaper.

Cheers and Happy New Year...wherever you will be this year!
30-something Travel

Posted by Stephanie at 4:00 PM