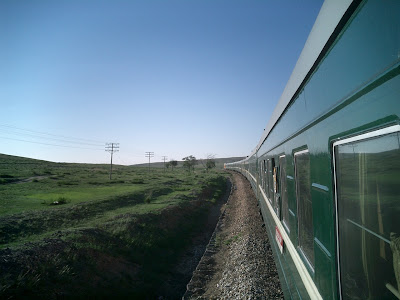 Planning a seven-day train ride from Beijing to Moscow is incredibly romantic.  Images of plush compartments, decadent dining cars and famous travel mates is what I remember from all those old movies.  And not to say I was at all disappointed, but this train ride is nothing like movies.

We had done our research, at least my husband had, but we went into the trip a bit nervous. It all started off a few days before the train left, meeting "a contact" in a chaotic office building in Hong Kong, handing him cash and leaving our passports to acquire (legal, hopefully) visas for Russia. But, it went smoothly and once that was accomplished (and it was legal), we headed to Beijing to connect with the "Monkeys", our tour company, located above a bar/restaurant.  And last, but not least, was the frantic late night grocery store run when I panicked at the thought of no decent food on a train for seven days and went to a local grocery store to stock up.

Departing from Beijing, with 12 packages of various ramen, fortune cookies, liters of water, tea and loads of Chinese candy now seems a bit ridiculous.  We were, after all, booked in first class, a private compartment with a huge window and a bathroom shared only with the other first-class passengers.   But the train that runs across three vast countries is a work horse, not a luxury liner, so it was not the full-service experience one might expect on the Orient Express.

The Trans-Siberian Railway is actually an often misused term which refers specifically to the train that runs through Russia, across Siberia, not the other two trains, or combination thereof, that run China-Russia (Trans-Manchurian) or China-Mongolia-Russia (Trans-Mongolian).  We were on the later. 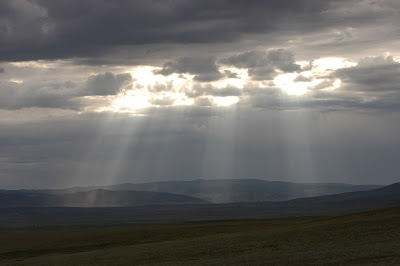 So what is it really like on this long trip through vast unknown lands?  Amazing for one thing. Incredibly beautiful scenery, three distinctly different cultures and hours upon hours of free time to really enjoy it where no one, no matter how hard they try, could actually reach you.

Adventurous is another word that springs to mind.  Staying in a ger on the Mongolian countryside and sampling the homemade mare's milk cheese was certainly out of the ordinary.  I also rode a very small Mongolian horse with locals and even foiled a bank robbery (OK, it was really just a pick-pocket but it was in a bank!) in the modern cowboy town of Ulaanbaatar.

A week-long history lesson.  Three times during the trip, the train stopped, was hoisted into the air and new "bogies" were put on the carriages.  This is because the track width between Russia and Mongolia and China differs by a bit over 3-inches, so the trains can't pass through the borders without changing gear.  We learned that it is fairly normal to have varying track widths, and lots of other interesting facts about the population of Mongolia and the still prevalent nomadic tribes, weather in Siberia, local customs in rural areas...an entire travel journal full of information.  In fact, I will never forget the comment of the Mongolian wife of a lawyer-turned-nomad who, when asked how she enjoyed this life, repsonded that it she didn't like it at all and preferred her life in the city.

And yes, it is also a bit boring.  We played over 25 hands of Gin, read two fairly long books and napped a lot. Day-to-day activities involved 1) waking up and figuring out where you are, 2) marking off how many miles were covered while you slept, 3) figuring out if you actually need to take a shower or can skip it for one more day, and 4) looking out the windows.  To shake things up, we chatted with other travelers, took a walk through the train and went to the dining car a couple of times.  Interestingly, on the topic of food service, no matter what we ordered for dinner, we got the exact same dish.  Not that it was bad, it was quite good local food (wherever we happened to be), but you could order steak, chicken, pork chops or lamb and it was exactly the same meal...and I am not sure which one it was. We later heard rumors that the meat was traded on the black market when we stopped at stations.

In the end, this was one of the most memorable weeks of many months of travel.  But next time, instead of passing by at hundreds of miles an hour, we'd like to stop and spend some time in the unlikely places to find out what life is like in the most remote areas along the way. One stop on the next itinerary will be Lake Baikal, one of the world's largest freshwater lakes.  And I definitely want to see Siberia in winter, with thick blankets of snow over everything...Dr. Zhivago anyone?

Tree Bones Resort - Get the ger (also known as a yurt) experience closer to home!

Posted by Stephanie at 7:28 PM