It's quite a haul from San Francisco to Barbados with  a red eye followed by a 5 hour flight.  But when its free (prepaid?) and you step outside to warm tropical weather it is worthwhile. 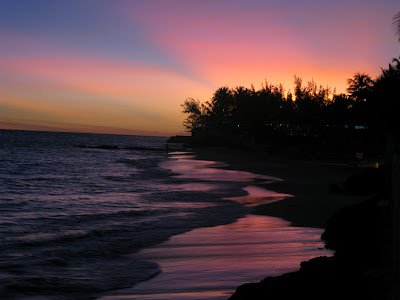 Even if it's only for two nights.  And you get stuck an extra four hours on the way back by weather.  And have to land to refuel.  And you end up sleeping on the floor of JFK Terminal 5 that night.  Hmm, maybe not quite worth that much effort. 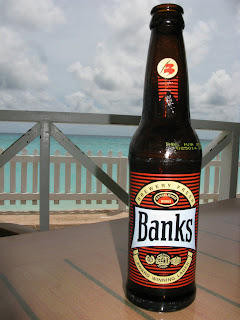 I only had 2 days on the island.  First day I was zonked, so I hit the beach in front of the hotel, had dinner and crashed.  Barbados is no culinary destination.  I did try the one local dish, flying fish, and can't claim to be a fan.  It's not a meaty fish so it's usually deep fried in batter so it doesn't all cook away.  But when you bite in it's a mix of light, dark meat and skin.  Clearly a few beers were in order.  The local (and only) choice being Banks. 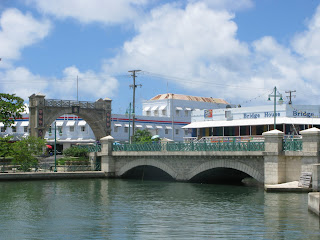 On my only full day I hopped the local buses, with pretty much only locals it seems, and headed up to Bridgetown.  Named for the bridge which has been replaced with the modern equivalent in the picture.  Not really worth going out of your way for, this is a working town for locals, with only a few tourist sites.  However, the buses are not only cheap (75 cents) but a cultural experience in themselves.  Highly recommended way of getting around.  Be warned you might be crammed into a small van.  Just stand on the street and either a real bus or a taxi acting as one will honk as it drives by.  Check the sign, and if they are going where you are flag them down. 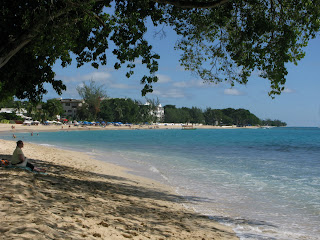 Beaches are clearly the reason people come to Barbados. And they are great.  The water is like a bathtub, and the sand is soft and at times pink in color.  Fabulous swimming all over the west part of the island (the east faces the open ocean and is much more rough).

The disappointing part of the island, however, is how built up it is.  The entire ring of the waterfront is covered with houses and hotels.  And for as far as you can see behind the water it continues with more houses.  So you certainly won't feel like you have escaped to nature.  The locals are very friendly and kind people.  But they will be hawking their jet skis etc while you sun bathe.

Overall it was worth every penny to get there.  Just not sure if it was worth that much time.  A great swim, weather and nice people.  But don't go for a natural experience.

Posted by Stephanie at 5:53 PM

Email ThisBlogThis!Share to TwitterShare to FacebookShare to Pinterest
Labels: Barbados