Best known as the home of the Kentucky Derby, Louisville is also the starting point for exploring bourbon country and is both a foodie destination and a historic city in its own right. 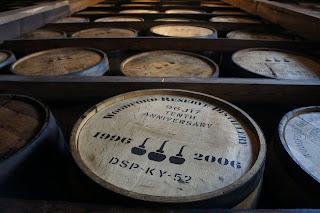 Breakfast, betting and bourbon was on the agenda for this trip, and that's because all the research I did before leaving pointed to these three things.  My personal goal in the three days we had in Kentucky was to complete the Bourbon Trail, which meant getting stamps from all six of the participating bourbon distilleries.  In addition to that, the Urban Bourbon Trail entailed another six stamps but this time from bars or restaurants.

The Bourbon Trail
Kentucky Distillers' Association, 502-875-9351, http://www.kybourbontrail.com/
Kentucky is home to the biggest and best bourbon distilleries producing almost all of the world's bourbon suplly. If you are in Kentucky, you are never more than an hour from a visit to at least one of the historic distilleries on the famed trail. Go for the history if not the bourbon itself. You'll need a car and/or driver and some time - each tour takes at least an hour and the distilleries aren't nearby each other or necessarily near Louisville for that matter.

Distilleries on the Kentucky Bourbon Trail:
The distillery tours are all very similar. You will hear - either from a guide or a video - how bourbon is made, the ingredients used and requirements for the alcohol to be called bourbon. If you can't or don't want to spend the time on all of the tours, we recommend at least the Maker's Mark tour and the Woodford Reserve tour, both on historic and/or National Landmark properties. All include small tastings at the end...the best part in our opinion.

Pick up your Bourbon Trail Passport at any one of the participating distilleries. Don't forget to get it stamped when you visit each one, then send it to the Kentucky Distillers' Association and proudly wear your new Urban Bourbon t-shirt.

As with the traditional Bourbon Trail, you can pick up your Urban Bourbon Trail Passport, collect the stamps and send it in for another t-shirt.  For a taste of what you are in for, check out this video all about the Urban Bourbon Train - http://www.singlemalt.tv/content/4115/Urban_Bourbon/.


Yes, there's more to Kentucky than bourbon...there's horse-racing of course. Although we didn't make it for the Kentucky Derby, a hot sunny Sunday afternoon at the track was exciting and profitable...overall winnings of $8.20, not bad. There's no need to dress up or wear a big hat on non-Derby days, the dress code is decidedly casual. Be sure to check out the Paddock area where the horses promenade in in a circle in front of the crowd while a commentator gives details on the upcoming race.

Eating in Louisville
Hit-and-miss is how I'd describe the food in Kentucky. We went expecting world-class BBQ, but it turns out Kentucky is a bit too far north to be considered barbecue country. (Although some locals will adamantly disagree and I welcome suggestions for great BBQ places.) My quest for a top notch coffee was never fulfilled either. However, we had some great meals, especially breakfast, which was a welcome surprise.

Hillbilly Tea
120 1st Street, 502-587-7350, http://www.hillbillytea.com/
This unassuming little place serves the most amazing breakfasts, and yes, lots of different teas, including fresh-brewed iced teas served in jars which are perfect on hot summer days. The Moonshine Breakfast with a grilled pork chop was amazing but the best thing I've ever been legitimately able to order for breakfast (because it was on the breakfast menu!) was bread pudding with bourbon sauce topped with toasted meringue. Be sure to get a homemade biscuit with local honey no matter how full you are. 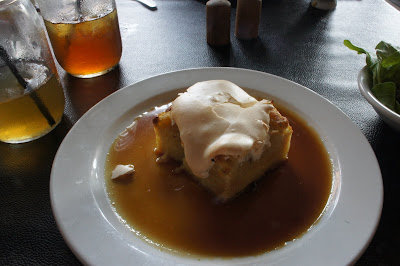 Bourbon's Bistro
2255 Frankfort Avenue, 502-894-8838, http://www.bourbonsbistro.com/
Locally owned, award-winning upscale bistro in the historic Clifton area, Bourbon Bistro offers much more than it's 130 bourbons available neat, in mixed drinks or in flights. The menu offers creative takes on local foods such as the Pan-Seared Pork Chop stuffed with chorizo and fresh mozzarella and the outstanding hamburger that comes with a portabella mushroom and apricot-bourbon mustard.

21c Museum Hotel, 700 West Main Street, 502 217 6300, http://www.21chotel.com/ – Conde Nast Travelers' Readers Choice Award for #1 Hotel in the U.S. and #6 in the world in 2009 and 2010. It really is like staying in a museum with exhibits in the lobby and artwork throughout the hotel. Our room was large with one wall of exposed brick, the staff was friendly and helpful and we enjoyed the nice bath amenities too.

Bourbon Boom: http://abcnews.go.com/US/wireStory?id=13890608
Interesting article from AP about the resurgence of bourbon.  Also, did you know Kentucky distills 95% of the world's bourbon according to the state distillers association?

Posted by Stephanie at 7:00 PM

Email ThisBlogThis!Share to TwitterShare to FacebookShare to Pinterest
Labels: USA