An hour layover is not enough time at the Amsterdam Schiphol Airport when you can be enjoying an Illy coffee and as much chocolate as you want. 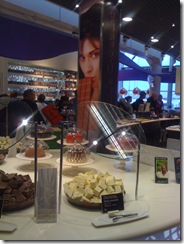 After a missed flight in Copenhagen, our quick trip home turned into an extra night away and a stopover in Amsterdam.  But it ended up a blessing in disguise as we discovered the recently opened Cafe Chocolat.

As a self-described coffee addict (see explanation in City Guide - Mallorca), it was actually the Illy sign I saw first.  But as I tore my eyes away from the lattes, I noticed that I was surrounded by chocolate – chocolate chunks, hot chocolate made by dipping sticks into hot steamed milk, chocolate cake…you get the idea.

P.S. If you aren't traveling through Amsterdam in the near future, you might want to take your own coffeemaker with you, like this AeroPress Coffee and Espresso Maker...